Adaptations for a War-Torn Time

Both plays in the collection respond strongly to the current political situation. Playwright Richard Engling adapted and directed Absolute Macbeth in a critically-acclaimed ritual production designed to "purge the tyrant" from our society. Engling and directors Ann Keen and Zack Brenner have collaborated for two years on the script of Antigone. Though they see the political landscape from different points of view, they all wanted to bring out the inevitability of war when societies demonize one another and reserve righteousness for themselves.

"Its text, courtesy of playwright and PET artistic director Richard Engling, admirably folds pockets of poetic cadences within a contemporary formality of speech that will be accessible to all."
--Fabrizio 0. Almeida, New City 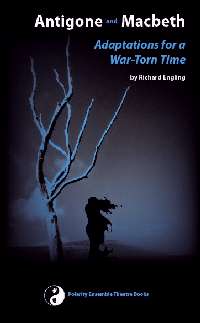