Why does a beautiful, talented woman take her own life? That's the mystery behind Richard Engling's Visions of Anna, a novel that takes us to the Paris of poets and writers, on and off a movie set in Hollywood, and to an epic ritual in the desert of Utah.

It is a story about healing the wounds of grief, setting a troubled soul to rest, and finding redemption in love.

Anna believed her life-long psychic pain arose from sexual abuse as a child. With shaman Tony Cappelli and Natalie, the true love he'd lost and found again, Matthew performs a ceremony to free Anna's soul. In the depths of the ritual, they uncover the mystery that poisoned Anna's life.

VISIONS OF ANNA is a literary novel with elements of contemporary American magic realism. It explores themes similar to those in the books of such authors as John Crowley, Lily Tuck, and Alice Walker.

Eric Cartier rated it on GoodReads.com:

Richard Engling has written a serious and moving novel about friendship, energy, memory, trauma, magic, healing, love, and creativity. Set in the 1990s, before portable technology emerged that purported to further connect us but only exacerbated our isolation, the story follows characters who seek a sense of peaceful and spiritual unification.

Engling especially succeeds in his descriptions of the act of creation: Natalie painting in her studio, Matthew writing on his typewriter, Tony combining the necessary elements (fire, costume, music, and medicine) to conjure and conduct mystical seances. These passages are existential in the sense that the characters are grounded and present, authentically becoming their essential selves in the act of generation. The writing is clear and direct, each word is measured, and the effect is transporting. A similar clarity enlivens a brief chapter, Apparent Joy, in which Anna and Matthew pursue their studies and writing in France: "There was a pleasure in the inconvenience. In the simplicity and austerity. There was a monkishness to their time in Paris that they frankly adored. […] All of this slowed life to its basics and focused them on the essentials. Was that the source of happiness?"

That lucidity makes for uncomfortable reading at other times, however. In describing Matthew's illness, Engling unflinchingly faces mortality: "Matthew's Day of Judgment would come when the cancer mutated into cells that could grow without testosterone. Then he could look forward probably to less than a year of life, rapid degeneration, weight loss, spontaneous breaking of bones, and a spectacularly painful death." Engling may be less successful in writing about Anna's plight, but it is difficult to know for certain, because suicidal depression is a complicated and messy mindset to evoke. An extended glimpse into Anna's journals is unsettling, especially because the entries are some of her final utterances, and because the topic of child sexual abuse is extreme. Engling is fearless, though, presenting problems that he resolves believably through the course of the story, exorcising the menacing spirits and memories that afflicted his characters.

The choice to title each chapter is questionable. Engling ought to have trusted the intelligence of his readers to discern each section's theme. Although that is a minor quibble, it is a curious one, because Engling is brave enough to carry his readers through magical ceremonies and reveal truths in remarkable moments such as the following: "They were not two halves of a whole, but two fragments of some larger being that even together, with their two consciousnesses conjoined, they could not remember, could not fathom, but could only sense in profound and devastated longing, like some forgotten dream of ecstasy, lurking hauntingly just beyond the limits of recall." That Engling was able to bring back and articulate such reports from whatever combination of experience and imagination he summoned makes this novel worth the time and energy of fellow seekers.

Stefan Brün rated it on GoodReads.com:

A mature novel that manages, at the same time, to celebrate the luxury of artistic creation amidst plenty and to mourn the explicable and inexplicable tragedies that populate a memory. I found myself a bit put off at first, as I was led into a story about suicide. Once in it, though, the movement of events, often lush sensuous scenes, and the plausible yet fascinating characters drew me in and along on what turned out to be at turns a joyous and harrowing ride. It spoke to me richly as an older artist, licking the wounds and mourning the losses while resting on scant but treasured laurels, and proud of the corruptions I’ve shrugged away.

Jenny Seidelman rated it on GoodReads.com:

A journey that explores love, friendship, the cycle of violence, and the creative spirit, "Visions of Anna" feels deeply personal and yet somewhat universal at the same time. This thoughtful book leaves the reader pondering relationships past and the challenges of moving forward in the face of tragedy.

Tycelia rated it on GoodReads.com:

I read this intriguing book slowly, savoring the beautifully written scenes. The plot & setting resonated with me as well as many of the main characters. I am an artist; I have spent time in the culture of the southwest; unfortunately a close friend recently committed suicide and cancer has its clutches in most of us at some point in our life. So despite the heavy topics, I enjoyed the insights, the quest for meaning and peace these well portrayed characters struggled to achieve.

Jenny rated it on GoodReads.com:

Engling’s jarring and emotionally blistering beginning chapters startled every part of me. I couldn’t stop thinking about the vivid and painful images and the characters’ lives and their coping mechanisms. The ride slows a bit, allowing one to catch their breath and consider the perspectives, direction and beliefs of the characters. A bittersweet account of friendship, grief, and acceptance.

Greg Silva rated it on Amazon.com:

A famous Hollywood screenwriter gets a cancer diagnosis. This sets him on a mission to make the past make sense; including finding out whether he had anything to do with the suicide of a lifelong friend. Meanwhile, author Richard Engling, in prose both elegant and evocative, takes us on sensual and spooky journeys to Paris—where writers fall in love—and Native American territories in Utah—where dying people banish demons.

This is not just a story about a guy finding out why a friend killed herself. It’s about a successful older man learning to live and love well, for the first time.

Helena rated it on Amazon.com:

Matthew Harken is a man troubled by a tragic event in his past --the suicide of his friend Anna--beautiful, young, artistic. Why did she do it? This is the haunting question the novel posts as a starting point to a deeper journey --a journey to cure oneself. Told in a lyrical, captivating style, it is a story that will involve you in its journey. 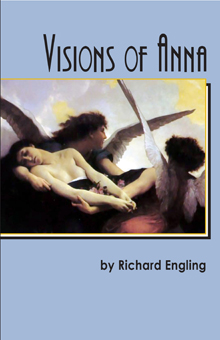 Fiction Review: "Visions of Anna" by Richard Engling and "She Plays in Darkness" by Fern Chertkow -- NewCity

The Indie View. "IndieView with Richard Engling, author of Visions of Anna" (an interview)